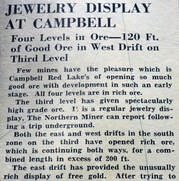 Source: The Northern Miner, Vol. XXXIII, No.13, June 19, 1947, pg. 1
The Creation of Campbell
The claims that make up Campbell Red Lake Mines (Campbell Mines) were first staked by prospectors in the 1926 Red Lake gold rush. However, lack of funding and the difficult geology caused the prospectors to let the claims lapse. In January 1944, George Campbell (a pioneer prospector from the Red Lake gold rush) and cousin Colin Campbell staked 12 mining claims near Balmer Lake. Campbell Mines incorporated in July 1944. While working the claims in October 1944, George Campbell made a discovery that would bring Red Lake into the spotlight again. More than 5,000 people came to the Red Lake area in 1946 hoping to capitalize on the renewed interest in gold.

In the summer of 1944, George Campbell turned to Brewis & White Ltd. to help fund exploration. Brewis & White made a $75,000 investment and optioned the property to Dome Exploration (a subsidiary of Dome Mines). However, the relationship was short lived and by the end of 1944, Brewis & White sold their shares to invest in neighbouring Dickenson Mines. Despite this set back, Campbell Mines had no issue selling shares after an article in The Northern Miner described the levels at Campbell Mines as jewellery displays and treasure chests.
​
Development on the Campbell claims started in earnest in 1946, when Campbell Mines began sinking their multi-level shaft. Prior to this, 10,980 metres (36,023 feet) of drilling was completed as well as trenching and stripping. The majority of this was completed after the Campbell discovery. Campbell Mines completed their initial 180-metre (591-foot) shaft in March 1947, and by 1948 the shaft reached 350.75 metres (1,150.75 feet). Construction of the mill began in 1947 and was completed the following year.
The Producing Years: 1949 – 2006*
Campbell Mines went into production in 1949 and would become not only one of Red Lake’s top producers but also one of the biggest producers in Canada. Within three years, Campbell Mines had recovered its construction and development costs (approximately $3 million) and was paying its shareholders dividends. By the mid-1950's Campbell Mines was processing 700 tonnes per day with an average grade of 0.6. In 1955, six short years after it started production, Campbell Mines had already produced over $18 million in gold.
​
Campbell Mines was one of the few Canadian gold mines that did not have to get government assistance through the Emergency Gold Mining Assistance Act (EGMA). After the Second World War, many Canadian gold mines struggled to stay in production due to increased production costs and a stagnant sale price. The EGMA was passed in 1948 and covered up to 50% of production costs over the Government’s set limit. In return, the mines would sell their gold directly to the government. Those mines not using the EGMA could sell to private companies and receive the best price—Campbell Mines sold to private refining companies like Johnson Matthey. The EGMA was repealed in 1976 when the United States stopped regulating the price of gold.

Between 1949 and 2006, Campbell Mines produced 11,216,443 ounces of gold, making it the largest producer in Red Lake’s history. In 2000, the mine poured its 10 millionth ounce of gold. All gold mined from Campbell Mines after May 2006 is included in the production totals of Red Lake Gold Mines.

Building Balmertown
Wherever a mine arose, a community was never far behind. For Campbell Mines, this started as a small community surrounding Balmer Lake (known as the Balmer Lake colony) that housed workers from both Campbell Mines and Dickenson Mines. The two mines quickly outgrew the original settlement and began supporting the development of a new town. Balmertown is the only Red Lake community that was not formed surrounding a mine. A city planner was brought in to map out the town, with the mines bordering the community.

​*After 2006, Goldcorp’s Red Lake properties were combined into Goldcorp Red Lake Gold Mines. The production years for Campbell Mines reflect this shift.
For more information on Brewis & White click below
Dickenson Mines
The Red Lake Regional Heritage Centre is a charitable organization, funded by the Municipality of Red Lake, the Ontario Ministry of Culture, and through fundraising activities. Reg # 87315 2714 RR001.