Evolution Red Lake Gold Mines
2006 to present
Produced 6,470,290 oz. ​
The 1990’s was a period of both highs and lows for Goldcorp. In 1991 the company underwent corporate restructuring and McEwen merged all of his mining companies (Dickenson Mines, Goldcorp Investments, Wharf Resources and Kam-Kotia Mines) to form Goldcorp Inc. In 1995, years of exploration culminated in the High-Grade zone discovery. Less than a year later, a four-year-long labour strike began. During the strike, production stopped, but exploration continued, and the mine started to modernize its equipment and mill. Goldcorp also secured 100% ownership of Wilanour Resources and the former producing Cochenour-Willans Gold Mines during this period.

The 2000’s fared better for Goldcorp. In March 2000, McEwen launched the Goldcorp Challenge (an open source exploration challenge to find the mine’s next six million ounces of gold) and brought the mine onto the global stage. The labour strike finally broke in April 2000, and the mine slowly got back into production. The early 2000’s also saw the discovery of the Deep Sulphide zones (2002) and the sinking of No. 3 shaft to work the High-Grade zone (2003). In 2006, Goldcorp bought Campbell Mines from Barrick Gold Corp.

Red Lake Gold Mines: 2006 - 2018
RLGM was created on May 12, 2006, when Dickenson and Campbell Mines merged into a single mining operation. Production, reserves and exploration projects were combined, making it the largest mine in Red Lake’s history. Exploration continued, and RLGM completed 554,427.8 metres (1,818,989 feet) of definition, delineation and exploration diamond drilling between 2007 and 2009. In 2008, Goldcorp acquired Gold Eagle Mines to gain access to the Bruce Channel deposit. Goldcorp dewatered and rehabilitated the Cochenour-Willans shaft to access the deposit. In 2012 a haulage drift between the Cochenour-Willans and Campbell shafts was created to move ore.

RLGM has maintained a commitment to worker and environmental safety as well as community relations. The mine continues the environmental rehabilitation efforts started by Goldcorp in the 1990’s and strives towards reducing their environmental impact. Updated equipment, information and technology has helped the mine advance but also contributes to worker safety. RLGM has formal agreements with the Wabauskang and Lac Seul First Nations that foster education and community collaboration.  Like many of the mines in Red Lake’s history, RLGM has contributed to the region in which it resides and supports recreation and healthcare in the community.

The main RLGM sites are the Red Lake (Dickenson Mines) and the Campbell (Campbell Mines) Complexes. Cochenour (Cochenour-Willans Gold Mines) and HG Young (H.G. Young Mines) are the mine’s main exploration projects. As of the end of 2017, RLGM has produced 5,985,290 ounces of gold with an estimated 2.17 million ounces in reserve and another 2.73 million ounces in measure resources. 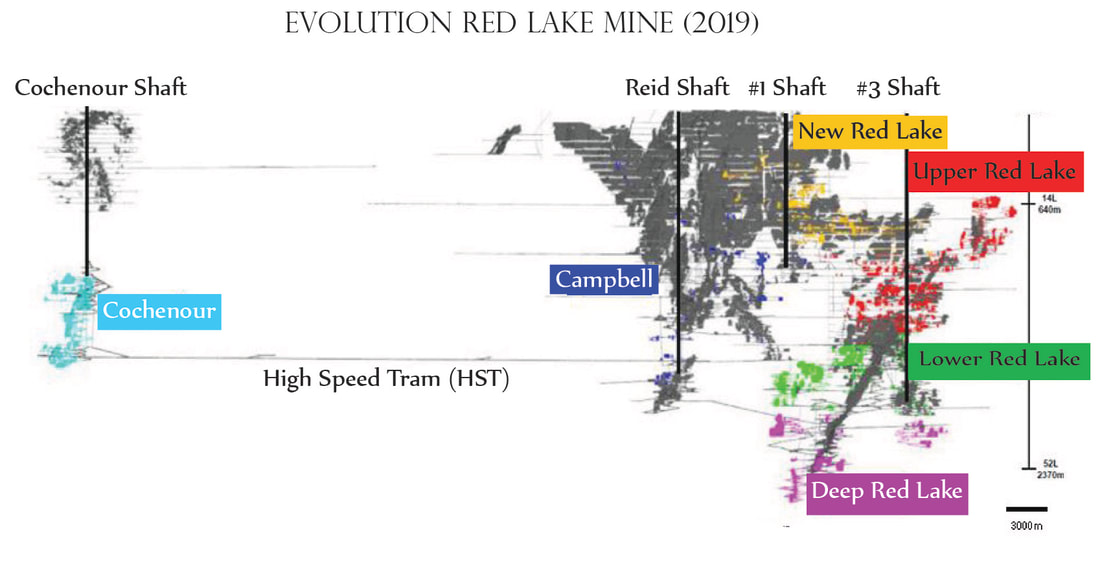 Newmont Goldcorp: 2018 to 2020
In April 2019, Goldcorp merged with Newmont Mining Corporation to form Newmont Goldcorp. This formation marked the end of the mine's ownership by Canadian entities. The merger cost Newmont around $10 billion dollars, and propelled them to the largest producer of gold (by market value, output and reserves). The reason for the merger was quite simple. It was a way to create synergy throughout the company, share mining and exploration techniques, and collect valuable assets.

The merger came with a huge cost, and to make up for it, Newmont needed to liquidate some of the assets it aquired during the merger. They needed to sell off approximatly 1.5 billion in assets. As a result, Newmont Goldcorp ownership of the Red Lake Mining property lasted only a year. Newmont began to scout possible buyiers for its assets, content to sell off properties such as the mine in Red Lake.

Evolution Mining: 2020 to Present
In late 2019, many interested parties would look at securing the Red Lake site. Rumours spread through the community, as interest in the fate of the mine caused great anxiety in the workers, their families and the overall community. One of the interested parties was a company based out of Australia. Evolution mining was interested in acquiring 100% of the Red Lake Gold Complex in Ontario, Canada, from Newmont Goldcorp Corporation. This acquisition included a transaction of $375 million (USD) and up to an additional $100 million (USD) payable upon new resource discovery. The deal was signed on the 26th of November, 2019. Once the deal was struck, the transition took time and by the end of March 2020, the Australian company was now in the business of Canadian gold mining. Evolution has committed to invest $100 million (USD) on existing operations and an additional $50 million (USD) in exploration at Red Lake over the first three years following completion of the Transaction. Evolution Mining and their Red Lake workers are excited about the future of Red Lake's active gold mines.
The Red Lake Regional Heritage Centre is a charitable organization, funded by the Municipality of Red Lake, the Ontario Ministry of Culture, and through fundraising activities. Reg # 87315 2714 RR001.