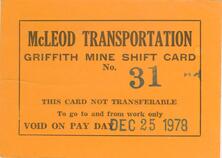 Griffith Mine shift card from McLeod Transportation, 1978
Origins
Geologist Dr. D.B. Dowling first noted iron mineralization near Bruce Lake (20 km north of Ear Falls) in 1893. However, it was not until 1912 that the area was staked. Tim Crowley and his three sons completed limited drilling before work was suspended because of Canada’s war effort. Work on the claims resumed in 1919, but the claims lapsed when news of the Red Lake gold rush spread. It would be almost 30 years before the area would be staked again.

A.C. Mosher with Lorne and Jack Dempster staked 24 claims for Calmor Mines Ltd. in 1953. Iron Bay Mines Ltd. was created in 1954 to take over the property and perform exploration. The company completed magnetometer and geological surveys to get an understanding of the ore body as well as 3,981 metres (13,062 feet) of diamond drilling between 1953 and 1960. Stelco Inc. (Steel Company of Canada) optioned the property in 1963. The mine was named the Griffith Iron Mine, although it was more commonly referred to as the Griffith Mine. Pickands Mather and Company was contracted to manage the mine for Stelco.

Production 1968-1986
In 1968 Canadian Bechtel Limited finished building the Griffith Mine's pelletizing plant, which went into production that March. By mid-March, the first shipment of iron pellets was on its way to Stelco’s Hamilton steel mill. The Griffith Mine was the region’s only iron producer as well as one of the few open pit mining operations in the Red Lake mining district. The large open-pit mine was active for 18 years and produced 22.9 million tonnes of iron ore pellets before it closed on March 31, 1986.

Legacy
While the Griffith Mine was not within the boundaries of the Municipality of Red Lake, it was very much part of the community. For decades Red Lake residents worked at the mine and used local company, McLeod’s Transportation, to get to and from the mine every day. More recently, the mine property has been home to a popular hiking trail. Even though the mine closed over 30 years ago, stories of the mine are still heard around the community.
​
In 2010, Northern Iron Corporation took over ownership of the Griffith Mine property and performed exploratory drilling. In 2012, Northern Iron began the process of dewatering Griffith’s North Pit, pumping out over four billion litres of water by 2013. There have been no more updates on the progress of Northern Iron’s Griffith Iron Ore Redevelopment Project, so only time will tell if the Griffith Mine will get a new lease on life.
The Red Lake Regional Heritage Centre is a charitable organization, funded by the Municipality of Red Lake, the Ontario Ministry of Culture, and through fundraising activities. Reg # 87315 2714 RR001.