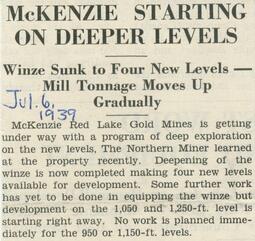 Source: The Northern Miner, July 6, 1939
The Making of McKenzie Red Lake
McKenzie Red Lake Gold Mines consisted of 12 claims on the northeast end of McKenzie Island. William McNeely staked the site in late 1925. McNeely Red Lake Holdings was created the following year to work the claims, exposing what came to be known as the Main Shear Zone. In 1931, Coniagas Mines optioned the claims, performing some diamond drilling before dropping the option.
​
McKenzie Red Lake Gold Mines incorporated in February 1933 to take control of the McNeely Red Lake Holdings claims. Wilfred P. Mackle was brought on as manager, and the new company immediately went into exploration and sinking a shaft. By 1935, the shaft was 104 metres (341 feet), and the mine had completed over 1,200 metres (3,937 feet) of drifting and crosscutting. Construction of the mill and other surface necessities began in 1934 and finished in early 1935.

The Producing Years: 1935-1966
On March 1, 1935, McKenzie Red Lake Gold Mines became the second mine in the Red Lake mining camp to go into production. The mine poured its first brick two weeks later on March 15. By the end of the year, the mine had produced over $500,000 of gold and averaged 88 employees. Within a year, the capacity of the mill was increased, and development of the Main Shear Zone continued. The North Mine Zone was discovered in 1940 and was developed to a depth of 720 metres (2,362 feet) by the 1960’s. The mine’s West Mine Zone was discovered in 1962 and explored.

​In late 2018, Enforcer Gold Corp announced that they were considering the acquisition of the McKenzie Gold project from 1082545 B.C. Ltd.

The Red Lake Regional Heritage Centre is a charitable organization, funded by the Municipality of Red Lake, the Ontario Ministry of Culture, and through fundraising activities. Reg # 87315 2714 RR001.