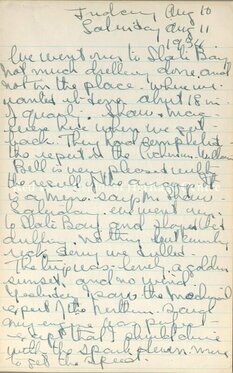 In 1934, Bill Cochenour hired W.P. Mackle and John Shaw from McKenzie Red Lake Gold Mines to evaluate the property. The two mining engineers saw promise in the project. On August 10, 1934, Margaret Cochenour (Bill’s wife) wrote in her diary ‘They [Mackle and Shaw] had finished with the report on Cochenour Willans...It is a mine says Mr. Shaw.’ Less than two years later Cochenour-Willians was created.

Cochenour-Willans incorporated on April 9, 1936, with Bill and Ed Cochenour at the helm as president and vice-president. Unfortunately, Dan Willans also disappeared without a trace in 1936. Although the Cochenours searched for Willans, they had a mine to develop. While Cochenour-Willans had Toronto-based investors, Margaret Cochenour’s inheritance was also used to help bring the mine into production. Mackle was hired to develop the claims and find a viable ore body. Between 1936 and 1937, Cochenour-Willans completed 3,048 metres (10,000 feet) of diamond drilling and underground development. The shaft was extended in 1939 to a depth of 121.9 metres (400 feet). Construction of the mill began in August 1939 and was completed by early December.

Although the mine did not close until 1975, Cochenour-Willans ceased production on August 31, 1971. The mine produced 1,244,279 ounces of gold, worth an estimated $41,362,230. Cochenour-Willans paid more than $6.2 million to their shareholders.
Creating Community
Like the rest of the communities in the Red Lake area, the town of Cochenour began as a mining settlement. As the mine grew, so did the community. Miners with families stayed in company-built housing developments, while single miners remained at the company bunkhouses. Cochenour-Willans supported the growth of the community they created and provided many of Cochenour’s amenities over the years. Cochenour-Willans built or supported a United Church, grocery store, school and hospital as well as community clubs and public works. The mine provided materials and supervision for the building of the community’s recreation facilities, while the miners volunteered their time as labourers.

The bond between Cochenour-Willans and the community was strong from the beginning. Every year, the mine provided children with Christmas presents, and Bill Cochenour even hired a figure skating coach for the young girls in the community. The Cochenours also established a trust fund that was used to support recreation and health care projects throughout the years. The mine and the Cochenour’s commitment to the community continued even after elected officials took control. While commerce in the community has diminished since the mine closed, the community still has a thriving population.