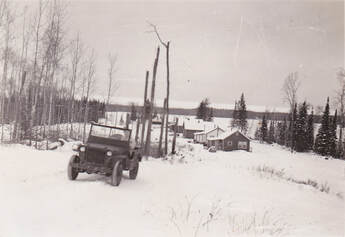 Balmer Lake colony, 1940's
As hundreds moved to Red Lake for the budding mining industry, small communities began to pop up all  over the region. There are seven communities that make up the Municipality of Red Lake today, but many of the mining projects between the two gold rushes need to create their own communities because of their remote locations. For example, Uchi Gold Mines established a completely independent community with post office, trading post and jail. Likewise Cole Gold Mines built a small townsite on Pipestone Bay for their workers. Each of the communities established in the historic period had the same origins, but developed in different ways.

The seven communities that make up the Municipality of Red Lake all have their own distinct history, character and characters. Balmertown, Cochenour, Madsen, McKenzie Island, McMarmac and Starratt-Olsen were company towns through and through. The communities started out as mine camps and moved into company built housing. Mines like Cochenour-Willans Gold Mines, Madsen Red Lake Gold Mines, Dickenson Mines and Howey Gold Mines made sure that all of their community's needs were met. The Red Lake mines continued to be involved in community betterment even after appointed and elected officials took over running of the communities. Today, the mining and exploration companies help support the local communities through a variety of efforts.

Of the seven municipal communities, Red Lake was the only non-company town, even though there were two operating mines within its borders. Red Lake rose organically, hugging the bay as homes and businesses were built. Cochenour, Madsen, Starratt-Olsen, McKenzie Island and McMarmac were constructed near their respective mines. Balmertown was created in the 1950's, relocating the Balmer Lake colony from the lake front. Because of this Balmertown was the only town that was laid out by a city planner. This move was imperative since both Campbell Red Lake Mines and Dickenson Mines were placing their mine tailings in Balmer Lake.

Click on a topic below to learn more about the commerce, recreation, education and medical history of the area. For personal memories of growing up in the different mining communities, there are several videos below.
The Red Lake Regional Heritage Centre is a charitable organization, funded by the Municipality of Red Lake, the Ontario Ministry of Culture, and through fundraising activities. Reg # 87315 2714 RR001.