Example of the pillow lava that make up the Red Lake greenstone belt - Photo Courtesy of the Ministry of Energy Northern Development and Mines
Since the discovery of gold in the early 20th century, the Red Lake goldfield has produced over 30 million troy ounces of gold. Many people have questioned what makes Red Lake, a small area in northwestern Ontario, so special that it can produce such a high value of gold. The simple answer is that Red Lake sits upon an Archean-aged greenstone belt. The 3 - 2.5 billion-year-old geological formation is a 70-kilometre long volcanic belt that is part of a larger chain of underwater volcanic islands (similar to Hawaii or Japan). The greenstone belt stretches from Manitoba through much of northern Ontario.

The Land Before Time: The Formation of the Greenstone Belt
Billions of years ago, a major mountain-building event happened.  Some volcanic rocks were pushed upwards, while others were pushed several kilometres down into the earth’s crust. At these depths, the rocks were subjected to high heat, pressure and hot, circulating, mineral-rich water, causing them to change. The water flowed through the rocks, leaching trace amounts of gold and other elements from the rocks. As the hot water rose, it cooled and deposited trace elements (like quartz and metals like gold) through the faults and cracks in the rocks. These deposits took on the appearance of veins. This happened countless times over 100,000’s of years before the system was complete.  During this time, the rocks went through a low-grade metamorphosis, forming new minerals like chlorite and epidote, giving the rocks a green hue. It took another 2.5 billion years to expose the gold deposit at the roots of the mountain chain. 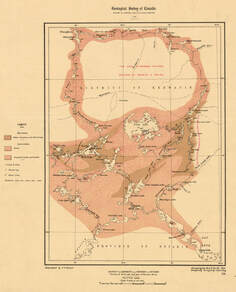 D.B. Dowling's map from 'Vicinity of Red Lake and Part of Berens River, District Keewatin and Province of Ontario', 1896
The Common Era: Red Lake Pre- Gold Discovery
For much of history, the rugged and secluded Red Lake area was known only by the Ojibwa people that called the land home. The semi-nomadic Indigenous peoples of this area moved and hunted with the seasons. Traditional food sources included caribou, deer, muskrat, beaver and manoomin (wild rice). The traditional Indigenous ways of life began to change with the arrival of the fur trade (late 18th century) and government geological surveyors (1872).

​The Geological Survey of Canada (GSC) was created in 1842 to survey the Province of Canada. The first appearance of Red Lake in an official GSC report was in 1872-1873. In 1872, surveyor Alfred R. C. Selwyn conducted an exploratory expedition around the Lake of the Woods and English River areas. While Selwyn mentions Red Lake in his report, he never visit the area. Robert Bell briefly surveyed Red Lake in 1883 and D.B. Dowling's 1893 map of the Red Lake area was foremost source of information on the Red Lake area until the 1920’s.

While some prospectors came to the area because of Dowling's report, it was Dr. E.L. Bruce's 1924 report that generated significant interest in Red Lake. In 1922, Bruce arrived in Red Lake in the late summer amid Red Lake's silver 'rush'. Bruce returned to Red Lake in 1923 to complete a detailed survey and take samples.

During this early period, the Indigenous people's knowledge of the area made them skilled and sought after guides. Red Lake's indigenous population also often assisted surveying and prospecting parties with extra food, mineral identification and medicinal needs.
The Red Lake Regional Heritage Centre is a charitable organization, funded by the Municipality of Red Lake, the Ontario Ministry of Culture, and through fundraising activities. Reg # 87315 2714 RR001.